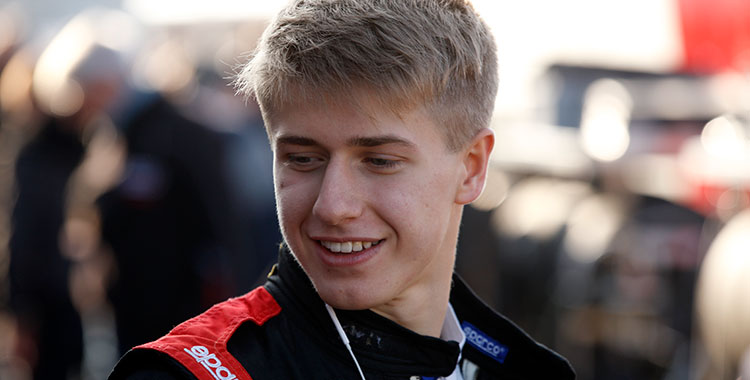 In 2017, Jüri Vips, his teammate Marcus Armstrong and Brazilian Felipe Drugovic entertained the crowds with a thrilling battle for the ADAC Formula 4 title, with Vips prevailing in the end. Now, the Estonian was promoted to the FIA F3 European Championship were he once again will have to battle it out with his former F4 teammate Armstrong. But while Armstrong opted for keeping on racing for Prema Powerteam, in his Formula 3 debut season, Vips switched to Motopark. “The cooperation with Team Motopark ran as smooth as silk right from the beginning,” Vips said. “My early experiences with the squad convinced me that I’ve found the right environment. With their great support they will help me to learn my trade in the FIA Formula 3 European Championship that is a totally different world compared to Formula 4. What I’ve found in Hockenheim and in our off-season testing programme makes me very confident for my next step.”

In the 2017 season finale the 17-year-old delivered in fine style and secured two 12th places in the highly competitive FIA Formula 3 European Championship field. And the steep learning curve he coped with in his two ADAC F4 years also impressed Motopark Team Principal Timo Rumpfkeil. “We took a close look at Jüri’s progress in his 2016 and 2017 Formula 4 seasons and in both years he proved to be an extremely promising talent,” Rumpfkeil said. “He has what it takes to go all the way. After our extensive testing programme following his first race weekend in 2017, I’m sure he only needs a very short period of time to be successful in Formula 3, too.”

Vips will be teamed up at Motopark with Marino Sato, Daniel Ticktum, Fabio Scherer and Jonathan Aberdein. The season kicks off in mid-May at the street circuit of Pau, France, located at the foot of the Pyrenees.