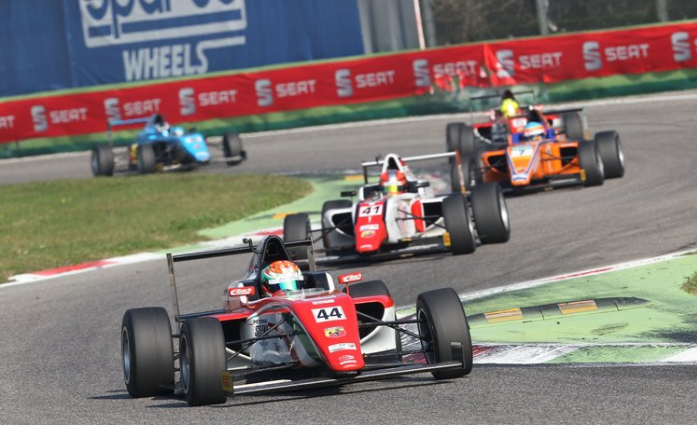 Juri Vips ended his season on top at Monza. The Estonian was the man to beat in the second half of the final Italian F4 Championship race, rounding out a season that also saw him claim the rookie title.

Having wrapped up the title last race, Marcos Siebert was under no pressure to perform, yet was immediately on the pace, jumping up to fourth after just a lap. Sadly for him, this wouldn’t last long as an incident with Diego Bertonelli dropped them all the way to the back.

Ye Yifei continued his strong of fine results by taking the lead in the early stages, though would soon find himself under pressure from the new rookie champion; Vips. The Estonian had made the most of the start and was soon into second ahead of Marino Sato.

Further back, all attention was on the battle for second in the championship. The spot was currently held by Mick Schumacher on 205 points, but with Raul Guzman just three points behind, a strong result for the Venezuelan was all he needed to steal second.

Schumacher had started at the back but was not prepared to slouch, quickly pushing his way up the order. Guzman had fewer places to take before he reached the front, but it proved no easy feat for the DR Formula racer.

A promising end to the season for Ye was short-lived as he lost the lead to Vips before retiring a few laps later alongside Sato. All of this promoted the other competitors with race two winner Sebastian Fernandez, Guzman and Schumacher battling over second.

Schumacher completed his pass on Guzman to take second, not just in the race, but also the championship. Sadly for Guzman he also lost places to Fernandez and Ian Geoffrey Rodriguez before falling further. His disaster was rounded off by a penalty, handed to himself and Fernandez for track limits.

In the end, none of this could stop Vips who dominated the second half and rounding out the season in style. Schumacher would be classed second from Rodriguez who claimed his first podium of the season. Behind them, Artem Petrov recovered to fourth in front of Fernandez, after his penalty. The top six was rounded out by Devlin DeFrancesco after a fairly quiet weekend from the Canadian.