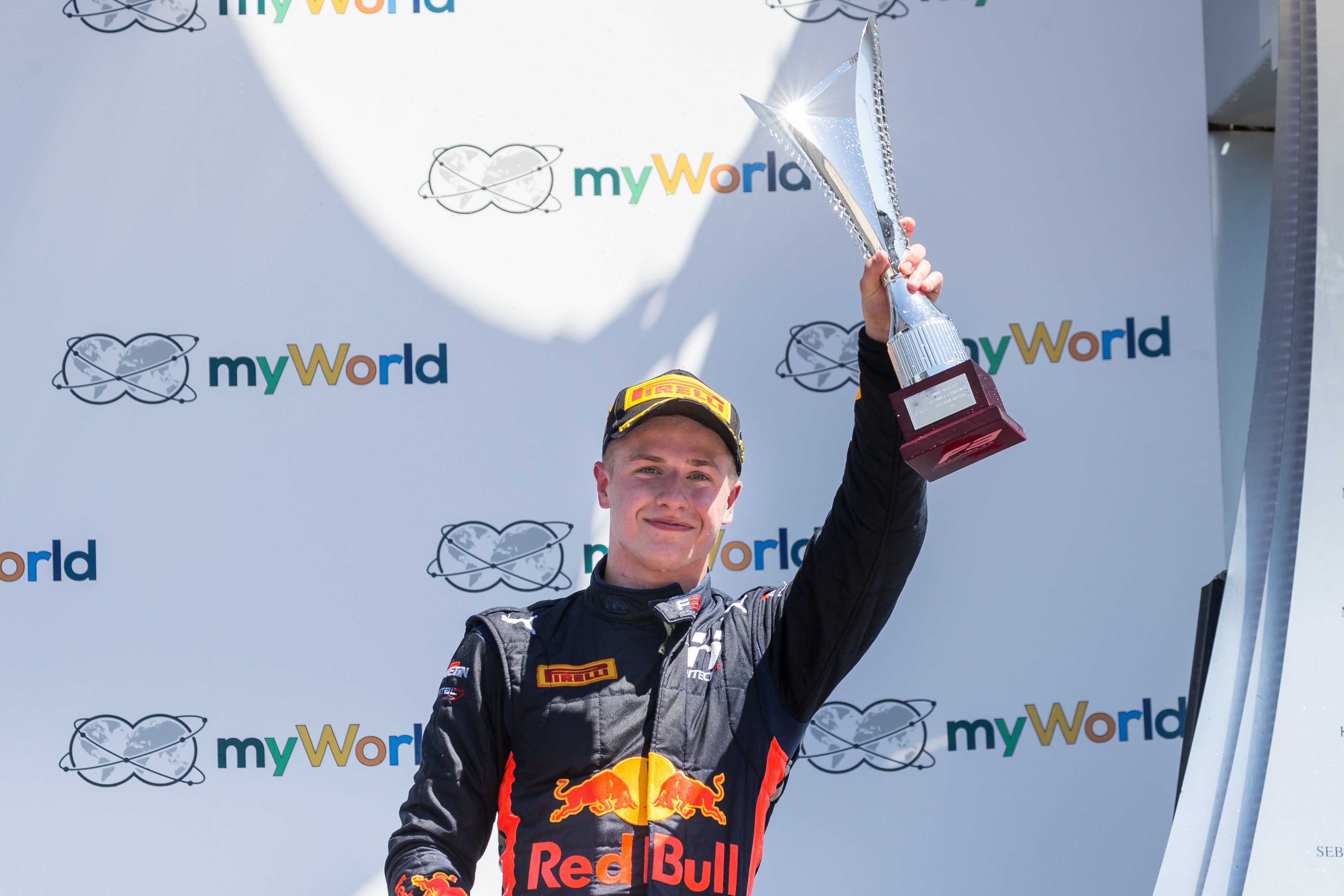 Jüri Vips achieved his first FIA Formula 3 win in style in today’s Race 1 at the Red Bull Ring, leaping two positons from third to become the first non-PREMA winner of the campaign. The Hitech Grand Prix racer finished ahead of ART Grand Prix’s Max Fewtrell and PREMA Racing’s Marcus Armstrong, muscling his way past the both of them in the early stages.

The Estonian overcame a frantic start and clung onto P3 despite an initial overtake attempt from Jehan Daruvala when the lights went out. Armstrong also came under threat at the start and initially lost first to Fewtrell who was quick off the line from P2. The Brit dashed in-front of the Kiwi and took the racing line, but Armstrong fought back and reclaimed the position down the inside of Turn 2.

Having seen such a promising start unravel, Fewtrell was soon fighting off Vips’ Hitech machine, who was having to attack and defend simultaneously thanks to Daruvala’s pace in-behind. The Estonian came out on top of the three-man dice and left Fewtrell to battle off the PREMA man racing in-front, fast catching Armstrong.

Vips followed up his move on the ART driver with a searing sweep on the Kiwi racer, soaring down the inside of Turn 3 and into the lead. Fewtrell took a tow and followed him, as the former race leader lost two positions in one move. The poleman looked to react, but a poor exit on Turn 2 gave Fewtrell breathing space and broke up the brawl.

Further back, a three-man tussle between Jake Hughes, Pedro Piquet and Robert Shwartzman had begun, with the latter making his way from ninth on the grid showing that there was no hangover from Friday when he had suffered technical issues in Qualifying.

The Russian driver further emphasised this with the race’s fastest lap, but couldn’t capitalise on a mistake from Piquet, who had temporarily lost his back end at Turn 1. The Brazilian reacted by setting a new fastest lap himself and confidently took fifth from Hughes who thus dropped to sixth.

The Briton battled back and reclaimed fifth at the corner, but soon faced another jaunt on the place as Shwartzman went three-wide with the two drivers and emerged ahead of them both at Turn 3.

The race entered its final lap and Daruvala was becoming frustrated with him inability to pass teammate Armstrong for the final podium place. Sensing a now-or-never moment, he took a stab down the inside of the Kiwi on Turn 4, but got too close and intelligently backed off as the duo came within an inch of Fewtrell’s rear wing.

Richard Verschoor managed to squeeze into the final points’ paying position ahead of Bent Viscaal prior to the chequered flag, while Lirim Zendelli snuck ahead of Leonardo Pulcini to give the order one final shake up.

Leaving those behind him to battle, Vips ran through the chequered flag in first, with Fewtrell second and Armstrong holding onto third. Daruvala and Shwartzman settled for fourth and fifth, followed by Piquet, Hughes, Zendeli, Pulcini and Verschoor.

The top two in the drivers’ standings remains unchanged, with Shwartzman leading Daruvala by 10 points. Vips holds third on 59 points, ahead of Armstrong and Piquet. In the Teams’ Championship, PREMA Racing lead the way with 204 points, ahead of ART Grand Prix on 68. Hitech Grand Prix are third on 61 points, Trident fourth on 49 and HWA RACELAB fifth on 22.

Zendeli will start on reverse grid pole in Race 2 ahead of the experienced Hughes, as the teams’ look to continue their charge down of PREMA tomorrow at 9.35am local time.